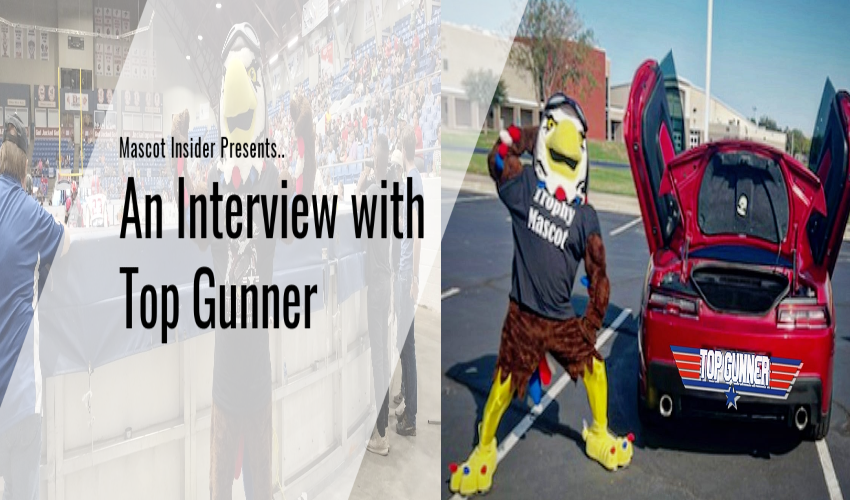 An Interview with Top Gunner

Mascot Interviews Is Back and Mascot Insider is pleased to present an interview with Top Gunner the official mascot for the West Texas Warbirds take a read below.

Can you tell the Fans a little about your Self and how you became to be the Mascot for Warbird Football Team?

I'm Bishop Greene aka Mascot Sensei and I've been a mascot entertainer for over 20 years.  I've entertained masses from high school to my collegiate days as Sammy the Bearkat for Sam Houston State. As semi-pro/ professional entertained for the Midland RockHounds ( minor league affiliate of the Oakland A's) and the Odessa Jackalopes (NAHL hockey).

Which lead me to this new opportunity to entertain as Top Gunner.  Interesting enough, the WTX Warbirds play in the same arena and the owner loved what he witnessed while I entertained the hockey fans and I was asked if I would be the mascot for their sports franchise. I said yes and the rest is history.  It was exciting to be a part of creating a mascot for a new team and having complete control developing the character's persons from scratch.

Your team has taken home the Championship Two Times so Far. And now you’re joining the NAL League in 2023 how excited are you for the Team and for yourself?

I'm super excited about entering the NAL, where they not only the players and fans but also the mascots. They have a mascot of the year award and I am going to compete for the award next season!  The West Texas Warbirds are undefeated and fully expect to be challenged next season.  We have a target on our backs and we know it but I'm confident that we'll be ready for whichever team we play first.  It's been a wild two years for us and our fans are starting gel with this franchise.

Is there a Favorite Skit you've done in the Past on the Field or off the Field?

One of my personal favorite skits was when I came out to the intro music of James Brown's "Living in America" in front of a baseball crowd in complete awe! It was July 4th and I rocked it!!! I've done skits that received way more appreciation but that one moment I appreciate so much because I introduced the Godfather of soul to a crowd that had no idea he existed! 🤣🤣🤣

I sometimes like to walk amongst the crowds entering the arena before the game begins and scope out fans that appear ready for fun times! I read crowds and navigate from there.

As Top Gunner, it varies from game to game.  There may be sponsored events that require my presence. Other times I'm able to improvise. This franchise has shown that it trusts my mascot experience and appreciates my ability to entertain our fans.

Do you have a favorite Fan Interaction or Memory if so, what is it?

I have certain things that I'll do for certain fans and it's just wit inside joke between the mascot and the fan. Every "penalty box heckle" moment is a favorite of mine. The crowds would get rowdy and I fed off of their energy.  But the most memorable moment I had as a mascot was during my days as Sammy the Bearkat. I was standing on the sidelines of the football field and became (informally) introduced to the late Steve "Air" McNair as he was hit out of bounds. Steve later became the starting NFL QB of the Tennessee Titans. The moment was brief but never forgotten!

We wanna thank Top Gunner and his pal Bishop Greene for taking the time to do an interview with us. You can follow Top Gunner on Twitter and follow some of his adventures on the Facebook as well. Plus you can also Follow his pal Bishop with his Facebook Page by Clicking Here.