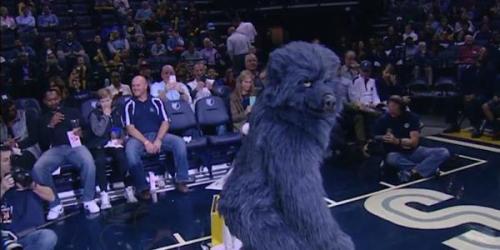 
Followers 0
The undisputed sexiest song in Ginuwine's arsenal was featured recently in a mascot performance that left fans all hot and bothered.  When most hear the song "Pony", they get flashbacks to the original Magic Mike movie. Some even picture a stripping Channing Tatum or Matthew  McConaughey. But unless you enjoyed The Revenant for completely different reasons, not many visualize a 7 foot tall bear.

Memphis Grizzlies fans were a bit shell shocked last week when the iconic song came on, and not only did the large bear mascot start dancing, but his clothes were quickly torn off his hirsute bod'! The routine was complete with twerks, booty shakes, and 'air humps'. Most of the dancing seemed to be a la Rihanna's "Work" choreography, and who knew Grizz could, "work, work, work, work, work, work."

This is not the first time that Grizz has made waves—in the past he got the team, and the reputation of the mascot in trouble in 2014 when he slammed a rival fan into a table. The team management doesn't seem to mind much if he causes controversy. The team does well but isn't a star in the division, and the mascot gets buzz, and therefore butts in seats. Even on the Grizz site "his signature shenanigans" are mentioned. Most of us find this amusing and hilarious—but parents with young kids in the stands may disagree as they often look up to mascots as idols. Who knows, maybe Grizz will be featured in the next Nicki Minaj music video... So next time Grizz is in town, maybe leave the kids with a sitter!In case you care, the Grizzlies won that game by 1 point.

Welcome to the Mascot Insider Community, a website dedicated to covering all things about Mascots. We continue to offer fans the #1 coverage of the Mascot Games in Orlando, FL, and attend other significant events, so fans get insider access to why mascots are awesome! Join the FREE community today.

© Copyright 2010-2020 Mascot.Blog apart of the Mascot Insider Family | We are not affiliated with MLB, NBA, NHL, NCAA or NFL or Other sports leagues.