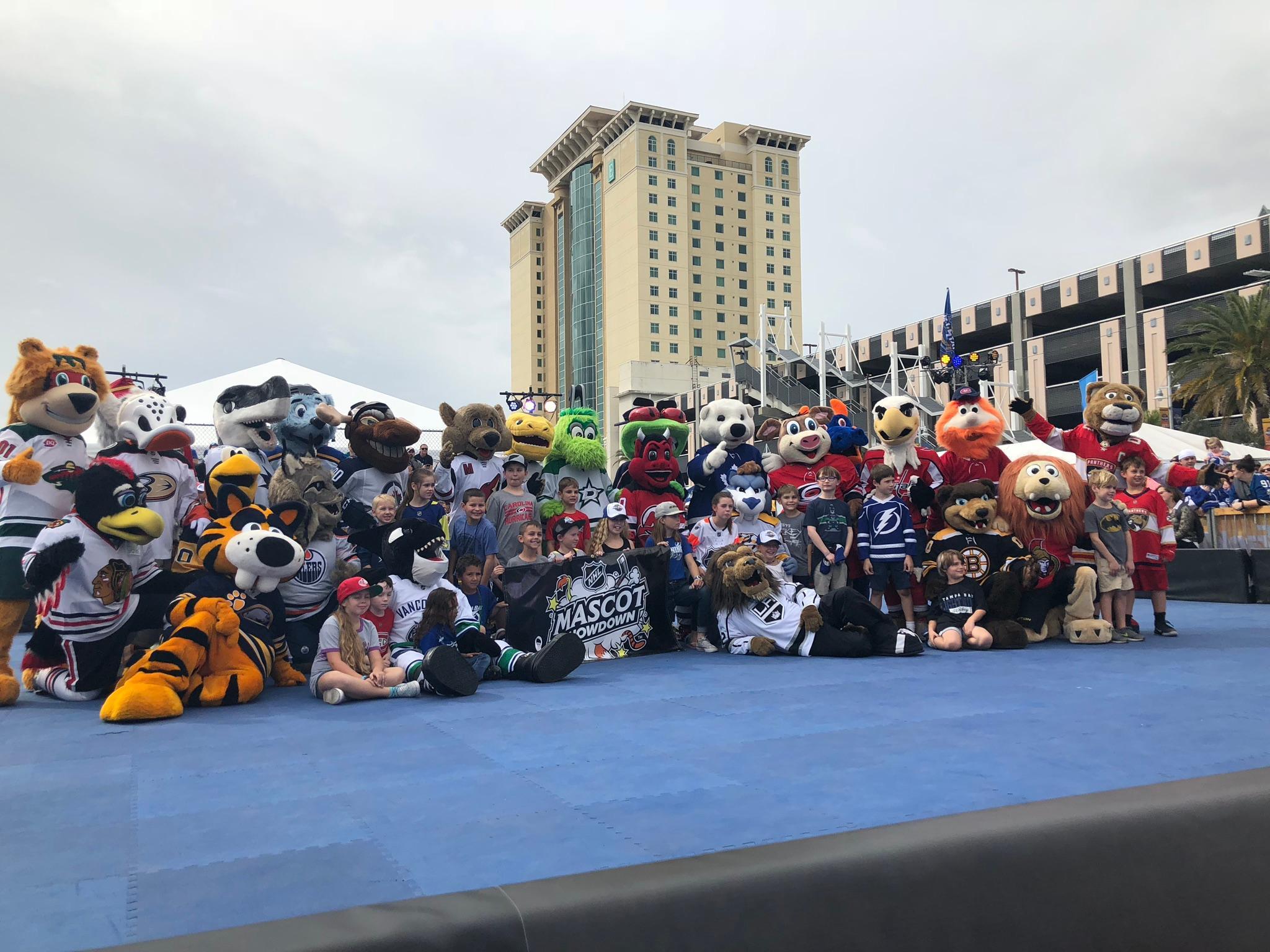 Just released by NHL Public Relations is that the NHL Mascot Showdown is returning for 2022 at the All-Star Weekend in Las Vegas! And our team we'll be covering some of the events thanks to one of our incredible Insider, Chris! You can read the full press release below.

NEW YORK -- The 2022 Truly Hard Seltzer NHL Fan Fair™ at the Las Vegas Convention Center West Hall will be the site of the seventh NHL Mascot Showdown™ presented by Upper Deck as part of the 2022 Honda NHL® All-Star Weekend, Feb. 3-6, in Las Vegas. Fourteen Western Conference mascots, led by the Vegas Golden Knights' own Chance™, will face fourteen Eastern Conference mascots, guided by Iceburgh™ from the Pittsburgh Penguins, in three days of friendly but fierce competition.

The NHL Mascot Showdown™ presented by Upper Deck is one of the most anticipated events at the 2022 Truly Hard Seltzer NHL Fan Fair™, the official fan festival of the 2022 Honda NHL® All-Star Weekend. Twenty-eight NHL Mascots™ (not every NHL team has its own mascot) will showcase their hockey skills and athletic prowess, offering family-friendly fun for fans of all ages. For the seventh time, NHL in-arena host Mike Todd will handle play-by-play duties for each event. Each competition will be preceded by a Mascot Parade to the rink followed by a ceremonial puck drop and mascot group photo. Two lucky young fans in attendance will be selected to lead the parade.

"We are excited to bring puck fans of all ages together to experience the NHL Mascot Showdown like never before," said Jodi Wasserman, Vice President of Marketing at Upper Deck. "Throughout the weekend we will be offering a variety of fun, family-friendly activities including Box Hockey, Pack Wars, Mascot BINGO, and more! Visit the Upper Deck Rink or Booth for a full schedule of events."

"We're thrilled to be working with Upper Deck this year for the seventh NHL Mascot Showdown," said Dave McCarthy, NHL Group Vice President, Consumer Products. "Together, we plan to create great memories for our fans attending NHL Fan Fair and the mascots are thrilled to represent their teams as they compete for the championship trophy in this year's competition."

A ticket is required for entry into the 2022 Truly Hard Seltzer NHL Fan Fair™. Tickets for each day are available in advance at NHL.com/FanFair at $15 for adults and $12 for youth, seniors, college students and members of the military. Children three years of age and under will be admitted free of charge. All tickets are subject to applicable fees.

Below is a schedule of NHL Mascot Showdown™ presented by Upper Deck events and competitions (all times are Pacific Time and subject to change). All competitions listed below will take place at the 2022 Truly Hard Seltzer NHL Fan Fair™ located inside the Las Vegas Convention Center West Hall.

Blades™ from the Boston Bruins
Sabretooth™ from the Buffalo Sabres
Stanley C. Panther™ from the Florida Panthers
Youppi!® from the Montreal Canadiens
SpartaCat™ from the Ottawa Senators
ThunderBug™ from the Tampa Bay Lightning
Carlton™ from the Toronto Maple Leafs

Howler™ from the Arizona Coyotes
Tommy Hawk™ from the Chicago Blackhawks
Bernie™ from the Colorado Avalanche
Victor E. Green™ from the Dallas Stars
Nordy™ from the Minnesota Wild
Gnash™ from the Nashville Predators
Louie™ from the St. Louis Blues
Moose™ from the Winnipeg Jets

Wild Wing™ from the Anaheim Ducks
Hunter™ from the Edmonton Oilers
Bailey™ from the Los Angeles Kings
S.J. Sharkie™ from the San Jose Sharks
Fin™ from the Vancouver Canucks
Chance™ from the Vegas Golden Knights

Prior to the 2022 NHL All-Star Skills™ presented by DraftKings Sportsbook on Friday, Feb. 4 at 4:30 p.m. PT / 7:30 p.m. ET, the NHL will livestream the seventh NHL mascot ice hockey game from T-Mobile Arena on the NHL Twitter, Facebook, and TikTok accounts, and NHL.com at 3:19 p.m. PT / 6:19 p.m. ET. Fans can follow all of the live action from the NHL Mascot Showdown™ presented by Upper Deck across NHL social media platforms. Bios for each mascot can be found here. For the latest news on the 2022 Truly Hard Seltzer NHL Fan Fair™, fans can visit NHL.com/FanFair and follow the NHL on Twitter (@NHL) via the official hashtag #NHLAllStar.